As we start to see the uptake in 4K video content, suppliers of CPUs, NIC (Network Interface Cards), networks (LAN, WLAN, Wi-Fi) and storage technologies will all be struggling to “step up to the plate” in meeting the challenges of this disruptive Video format.  Also IAAS platform providers will face huge challenges to configure cloud components that can be rapidly provisioned  for 4K content or Video Streaming.  Even the security industry will be affected regarding the video surveillance infrastructure (see this Video Security Magazine article).

Ultra-high definition (UHD) resolution is 3840×2160 Pixels now used in displays and broadcast., This does not equal 4K (4096×2160 Pixels) used in digital cinema. People tend to used them interchangeably but there is a significant difference in impact on the networking bandwidth required to service consumption of 4K.

We all are aware from a display technology perspective that TVs are now offering this content.  However, how about other network and computer infrastructure components?  When will they be able to handle  the disruptive impact of 4K?

This is a very interesting slide deck on Internet Trends.  Specifically when you dissect digital media into audio, photo, video and audio you see we are just at the beginning of a huge growth in demand for Cloud Services to support our digital lifestyle. When you combine what we want digitally with how we use it and socialize using it, the volume of digital content will grow at an unbelievable rate through 2035. internettrends052913final-130529094939-phpapp02

When we look at the history of the PC industry, we see that while Moore’s Law is fantastic, it is always outpaced by consumer demand. Market expanding software solutions can be developed faster than hardware solutions to develop but are frequently performance constrained by the limits of running on general purpose processors. Eventually IHVs see a large enough market and have time for development of custom silicon to parallelize the process. This lag time between when the problem is first noticed and when it’s solved in silicon can be referred to as the “Wilson Gap” aphras coined by some Microsoft employees who worked with me and quoted my assessment as “Information consumer appetite/demand will always outpace CPU capability” which I stated in a meeting regarding complex computational transforms.

By doing a simple analysis of this “Wilson Gap” over a series of technologies we can see some very interesting patterns:

*Note: This illustration is based on 2011 estimates

The vertical axis represents the number of years a particular technology was on the market in software-only form before it was introduced in silicon as an ASIC (Application Specific Integrated Circuits). Based on this data I would like to postulate that companies like Microsoft & Google have direct bearing on these figures, and that in many cases they can significantly reduce the Wilson Gap. But first, let’s review the situation a little further.

How the SW Industry Fights the Wilson Gap

While the flexibility general purpose CPU offers imaginative engineers the ultimate design surface, it likewise has the inherent limitation that code must be reduced to a lowest common denominator, that being the CPU instruction set. Time and again, this limitation has caused a Wilson Gap in what consumers want and what the PC platform is able to inherently deliver.

As the previous graph illustrates, the Wilson Gap was a limiting factor in the potential market for specific technologies, when the CPU was not fast enough for the consumer demand of floating point operations. Likewise, at various times throughout PC history, the CPU has not kept up with demand for:

When Moore’s Law is too slow we traditionally rely on ASICs to fill the Wilson Gap. In all of the examples above (Math Coprocessor, DSP, 3D, 3DES, RSA, MPG, etc…) we now have fairly low-cost ASICs that can solve the performance issue. Total time to solution and time to money are far too long for current industry economic conditions. These (ASIC) processors will typically accelerate a task, off-load a task or perform some combination of the two. But for the remainder of this paper we’ll use the term “accelerate” to include acceleration that encompasses CPU off-loading.

The Downside to ASIC Solutions

Unfortunately ASICs are inherently slow to market and are a very risky business proposition. For example, the typical ASIC takes 8 to 12 months to design, engineer and manufacture. Thus their target technologies must be under extremely high market demand before companies will make the bet and begin the technology development and manufacturing process. As a result, ASICs will always be well behind the curve of information consumer requirements served by cutting edge software.

Another difficulty faced in this market is that ASIC or Silicon Gate development is very complex, requiring knowledge of VHDL or Verilog. The efficient engineering of silicon gate-oriented solutions requires precision in defining the problem space and architecting the hardware solution. Both of these precise processes take a long time.

A newer approach to reducing the Wilson Gap that is gaining popularity is the use of Field Programmable Gate Arrays (or FPGAs). FPGAs provide an interim solution between ASICs and software running on a general purpose CPU. They allow developers to realign the silicon gates on a chip and achieve performance benefits on par with ASICs, while at the same time allowing the chip to be reconfigured with updated code or a completely different algorithm. Modern development tools are also coming on line that reduce the complexity of programming these chips by adding parallel extensions to the C language, and then compiling C code directly to Gate patterns. One of the most popular examples of this is Handel-C (out of Cambridge).

The Downside to FPGA Solutions

Typically FPGAs are 50% to 70% of the speed of an identical ASIC solution. However, FPGAs are more typically geared to parallelize algorithms and are configurable so as to received updates, and leverage a shorter development cycle (http://www.xilinx.com/products/virtex/asic/methodology.htm). These factors combine to extend the lifespan of a given FPGA-based solution further than an ASIC solution.

Looking at the market for hardware accelerators over the past 20 years we see a repeating pattern of:

Next the technology typically takes one of two paths:

Now let’s examine two well known examples in the Windows space where the Wilson Gap has been clearly identified and hardware vendors are in the development cycle of building ASIC solutions to accelerate our bottlenecks.

Our first example is in Windows Media 9 Decoding; ASIC hardware is on its way thanks to companies such as ATI, NVIDIA and others. This will allow the playback of HD-resolution content such as the new Terminator 2 WM9 DVD on slower performance systems. Another example here is in TCP Offload Engines (TOE); which have recently arrived on the scene. Due to the extensibility of both the Windows’ Media and Networking stacks, both of these technologies are fairly straightforward to implement. 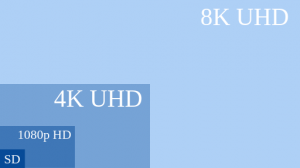 The complex nature of encoding 1080p HD will be child’s play when users start to hunger for the visual quality of 4K (probably starting the end of 2013) and Ultra High Definition.  The CES-type suppliers and the NAB-type of content providers will start to put the technology platforms and the consumer content into distribution as the demand increases.  Just like the rapid evolution of the mobile phone’s HD support, computers, TVs, DVD and content libraries will be forced to satiate the consumer’s apetite for better video quality and the “more life like” imagery inherent in these new resolutions beyond our current 1080p HD products.